After an intense first year on the project, data collection is now complete. As Heather has discussed elsewhere, we’ve started the initial analysis on some of the group interview data by developing a set of thematic codes to cut into the data which spoke to the research aims and questions, as well as unexpected themes and concerns that came up in young people’s talk about celebrity culture (for example: ‘routes to fame’ and different ‘genres’ of celebrity). Having coded the transcripts, we’ve started to take on individual sub-codes and develop summaries of their content, making initial observations about the patterns and themes within these. While this only represents the beginning of our analysis, this process of immersing ourselves in the data has allowed us to get a handle on some interesting patterns in how celebrity culture relates to young people’s classed and gendered aspirations. In this blog post, Kim discusses some of the themes and patterns that emerged from one of her coding summaries: young people’s talk about celebrities associated with ‘technology and enterprise’.

These celebrities included British entrepreneurs Alan Sugar and Richard Branson, but mainly this talk was about a group of inventors and CEOs of internet corporations such as Larry Page and Sergey Brin who created Google, Jack Dorsey who created Twitter, Facebook’s Mark Zuckerberg and one of our case study celebrities – Bill Gates previously of Microsoft and now of the Bill and Melinda Gates Foundation. While these celebrities were discussed less than those associated with music, film, television, sport and royalty, there were some very interesting patterns in how they were mobilised by young people, specifically the role they served in young people’s distinctions around ‘good’ and ‘bad’ celebrity and with this, their notions of ‘success’, aspiration and achievement.  Indeed, these celebs tended to generate very positive responses among our participants, described as talented, clever, inspirational and having made a positive impact on society through being innovative and creative. Perceived as ‘famous for the right reasons’, with fame and money a byproduct of their skill and talent rather than an aim in and of itself, they were associated with ‘good celebrity’:

I mean he’s not really, he’s more famous for what he’s like built, rather than for doing anything else so, yeah.

Is he talented, do you think?

Er yes, yeah, I would say he is talented.

What has been striking in these data are the connections participants made between the products they consumed, and their evaluation of the individuals who have created these, with one participant asking regarding Bill Gates ‘where would we be without half of the stuff he made?’ For some, this relationship as consumer of these social media products seeped into their own aspirations for work. In one discussion between year 10 pupils about the wealth of Bill Gates, Mark Zuckerberg and Mark Pincus (the creator of the social network gaming company that created FarmVille, worth over £3.5bn), we see how these celebrities become associated with particular ideals about what makes ‘good work’:

They work but they, what they are working is good.

They have to earn it though.

Yeah but at the end it’s like with their mates.

While I can imagine many people – MPs, parents, policymakers, the BBC – would greet this finding with delight (‘Great – young people want to become successful entrepreneurs and social media successes! Look at the ambition!’) we need to hold back on such celebratory proclamations and think a bit more critically about what’s going on within this kind of positioning of these celebrities, and what this might mean for the ways in which young people can imagine their futures in particular areas of work.

Firstly, in the talk about these ‘tech celebs’ we detect the presence of particularly seductive tropes and ideas about ‘new media’ careers as embodying the characteristics of ‘good work’ which is exciting, informal and cutting edge and where careers are built out of private passions. The work of Ros Gill (one of our advisory group members) is really useful here. Ros has argued that new media workers have emerged as ‘poster boys and girls’ for new forms of work in the knowledge economy – what Ulrich Beck calls the ‘Brave New World of Work’. Such idealisations came up in another group interview where one participant discussed wanting a job like Burnie Burns and Gavin Free, creators of internet company, Rooster Teeth:

Um. Basically … make short films and web series, merchandising that sort of thing. [I: okay] They release a weekly podcast as well. They did the first live screen video podcast as well. So, they do that … I would love Gavin Free’s job … He just plays games.

You need only turn to the recent film The Internshipto see the currency of these ideas. Featuring Vince Vaughn and Owen Wilson as slightly washed up, unemployed ex-salesman who ‘bluff their way’ into a ‘coveted’ internship at Google. The Google HQ workplace is presented as youthful, playful, fun, and non-hierarchical: the creator of Google, Sergey Brin, featuring in the film riding an elliptical bike and mingling merrily with the interns. When Vaughn and Wilson first arrive at Google HQ, Wilson looks around and says, ‘Picture the greatest amusement park you’ve ever been to as a kid. Now imagine nothing like it and a million times better’. This is not just Hollywood fantasy: The official youtube video on ‘the real Google Intern’ is full of these tropes, presenting Google HQ as a desirable E-topia of challenging but rewarding work, which enables creativity and autonomy (‘google is an environment which places few limitations on where your mind can go’); and rewards motivation and passion (‘Interns have in common a passion and motivation to get these things done … you don’t have to know everything but you have to be willing to learn’).  As Ros Gill and I have argued, the celebrification of new media careers is dangerous, as the pleasures associated with new media work sweeten and mask the insecurity, exploitation and inequality which are characteristic of work in these industries. 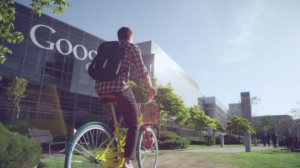 At the end of the ‘real’ Google Intern Video, one intern says: ‘If this is what being an intern feels like, I’d love to be an intern for the rest of my life’. Arguably an advert for Google, the film and broader cultural representations of careers in these sector, can also be seen as adverts for precarious types of employment like internships, where young people are told they’re ‘lucky’ to get the much ‘coveted’ and desired opportunity to work for free.  My own work shows that internships not only on reproduce privilege by operating as mechanisms for social closure; they also work to foster young people as compliant, enthusiastic and willing to self-exploit: the happy housewives of the working world. Even though it is reported that Google pay Interns well (as this celebratory Daily Mail article tells us), what is important is that such normalisation of internships in sectors such as new media, masks the reality that such high payment (and indeed any payment) is the exception rather than the rule in an economy where young people like our participants are likely to struggle to find ‘decent work’.

Secondly, what is striking and depressing about these data is the significance of gender – as well as class and race – to who gets to embody the ‘tech celeb’, associated with ‘deserved success’ and the ‘inspirational role model’. Depressingly, as I compiled a list of these celebrities, I was struck by the gendered and raced homogeneity in this category, as the visuals below startlingly illuminate. 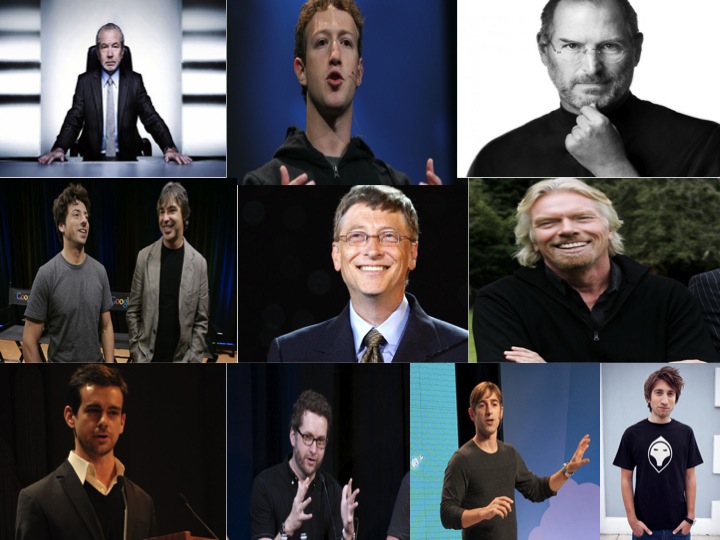 As we have discussed elsewhere, hierarchies of good and bad fame and debates about a crisis in ‘aspiration’ are infused by judgments about social class and gender.  Women, particularly working-class women, have come to embody ‘bad’ celebrity, the abject and othered status of ‘famous for nothing’: with Kim Kardashian and Katie Price positioned ‘at the bottom of the celebrity pit’ (as one of our participants summarised).  Given this, the gendered, raced and classed homogeneity of those tech celebrities celebrated by our participants  and in broader debates is worrying.   As Carole Leathwood has recently argued in a paper on the symbolic construction of ‘the intellectual’ in academia, the realm of the intellect has long been constructed as the preserve of elite white men, with women, judged on the basis of their sexual attractiveness as well as their capacity for ‘care’ , positioned outside of this domain.

We see within our data the clear presence of similar cultural codes and the Cartesian dualism which ascribes to the masculine characteristics such as rationality, authority, control, discipline and intellectual mastery, which appear to function centrally in evaluations of ‘good celebrity’. This sits in contrast to the central place of the unruly, excessive, sexualised body of female celebrities who have come to epitomise ‘bad’ celebrity and generate disgust and vitriol on this basis.  Research on the gendered constructions of STEM subjects (like computing, physics and maths), including work by Heather, demonstrates how narrow representations of the professional worlds associated with STEM subjects make it difficult for women and young girls to imagine themselves in these kinds of careers, impacting on their subject and career choices. If celebrity culture provides cultural resources in young people’s understandings of who they are and who they might become, the gendering of good and bad celebrities, ‘deserved success’ and the ‘dream job’ – exemplified here in the case of tech celebs – is a cause for concern.

This is re-posted from the Celebrity and Youth blog which documents a research project entitled: ‘The role of celebrity in young people’s classed and gendered aspirations’. It is being carried out by Heather Mendick and Laura Harvey at Brunel University and Kim Allen at Manchester Metropolitan University between September 2012 and April 2014 and funded by the Economic and Social Research Council.