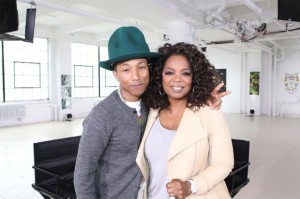 We’ve been struck by news this week that Pharrell Williams – successful music producer, singer and collaborator – has asserted his belief in ‘the New Black’.  In an interview with US chat show host Oprah Winfrey, Williams stated that he represented a different kind of black identity:

In this post Kim troubles Pharrell’s move, arguing that it denies the ongoing realities of racism.

Those familiar with the project  will know that we’ve been fascinated by the ways in which race and racism have featured within  Will Smith’s celebrity mediation. Will – another hugely successful black man in the entertainment industry – has continually asserted the significance of individual motivation, a ‘sickening work ethic’ and the power to dream , when explaining his ‘success philosophy’.

Within this, race and racism have been absent presences in both his on-screen and off-screen personas.  Most strikingly, this is evidenced in Will’s public declaration following the election of President Obama that America is not a racist nation and that there is no ‘white man’ keeping African Americans down. We’ve used this before but it’s worth repeating here:

When Barack Obama won, it validated a piece of me that I wasn’t allowed to say out loud – that America is not a racist nation. I love that all of our excuses have been removed. … There’s no white man trying to keep you down, because if he were really trying to keep you down, he would have done everything he could to keep Obama down. … .I’m an African American, and I was able to climb to a certain point in Hollywood. On that journey, I realised people weren’t trying to stop me. Most people were trying to help me. … If Barack Obama can win the presidency of the United States, you can absolutely be the manager at Saks.

As we’ve argued elsewhere, these narratives of post-racial meritocracy and the denial of racism embodied in Will’s celebrity and  Pharrell’s ‘New Black’ manifesto, need to be read critically.   What does it mean to insist on looking beyond colour? To insist that we not ‘blame race’ ?  To insist on the power of individual ‘mentality’ and ‘hard work’?

Sara Ahmed’s work continues to be a great resource for us in thinking through the symbolic and indeed material effects of these post-race narratives.  In her work on racism, Ahmed states:

People of color are often asked to concede to the recession of racism: we are asked to ‘give way’ by letting it “go back.” Not only that: more than that. We are often asked to embody a commitment to diversity. We are asked to smile in their brochures. The smile of diversity is a way of not allowing racism to surface; it is a form of political recession. …. Racism is very difficult to talk about as racism can operate to censor the very evidence of its existence. Those who talk about racism are thus heard as creating rather than describing a problem. The stakes are indeed very high: to talk about racism is to occupy a space that is saturated with tension. …. When you use the very language of racism you are heard as “going on about it,” as “not letting it go.” It is as if talking about racism is what keeps it going. .. .The melancholic migrant is the one who is not only stubbornly attached to difference, but who insists on speaking about racism, where such speech is heard as labouring over sore points. The duty of the migrant is to let go of the pain of racism by letting go of racism as a way of understanding that pain.

Pharrell’s latest single is called ‘Happy’, and has been taken up as a global anthem for happiness – the focus of his emotional interview with Oprah.

We’ve written before about how Will Smith has come to operate as a ‘happy object‘ in our data – talked about as a cool guy guaranteed to make you feel good. That both of these men have come to be associated with happiness is compelling. In their happiness, their gratitude for their success, their refusal to speak of or use the language of racism, Will and Pharrell create ‘shiny surfaces’ that conceal racism and appease our white guilt. They are not melancholic killjoys, angry or fixated with injury. Neither are they harbouring over ‘sore points’. Both carry the injunction that those of colour must ‘get over it’ : pick the ‘right side’ and move on. 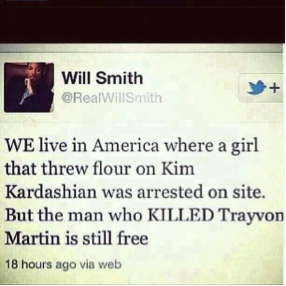 One of the most intriguing moments I experienced over the sixth months of collecting data on Will’s celebrity mediation – from news articles to social media – was the discovery of a tweet purportedly posted by Will in response to the murder of black teenager Trayvon Martin by neighbour George Zimmerman – acquitted in July last year. This tweet went viral, retweeted by millions as people expressed their outrage at the racial injustice of  the case.  It was in fact a hoax.  Will had neither posted this tweet nor made any statement on the murder of Trayvon Martin.  For me, the case of this never-tweeted-tweet neatly encapsulates Will’s complex position as a figure of post-racial fantasies.

As the Guardian rightly states, Pharrell’s ’take on The New Black seems incredibly naive, if not damaging’.  In embodying ‘happy’ diversity, Will and Pharrell de-emphasise and depoliticise  blackness – taking it out of its historical, social and cultural context.  The ‘New Black’ manifesto elides the presence of racial inequalities and practices of white privilege operating within society’s institutions of media, education, work, policing and so on, that we know continue to shape young people’s opportunities and experiences.

As Ahmed states, ’unless race is taken up as an explicit object of concern, made into a question, whiteness is the default position’. As happy objects, these ‘New Black’ narratives mask the depressing violence and injustice of racism.

Kim is currently working on the ESRC funded project Celebrity and Youth project with Heather Mendick and Laura Harvey (Brunel University). This was originally posted on the CelebYouth blog.